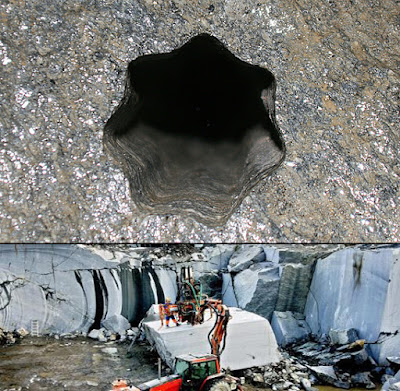 On 30 November 2007 in Norway, while workers were doing work for the extension of a park, it was discovered a hole in a stone, which had an unusual shape.

After removing surface vegetation and loose surface material, contractors started working on the massive mountain. It was during this work inside the mountain, this hole was unveiled. The hole is peculiar, it looks like a seven sided star. It penetrates into the mountain. (According to local people; contractors have reached four meters into the mountain, it is said that the hole continues horizontally inward in parallel to the Volda fjord in a north/western direction, the hole tilts slightly downward) The diameter of the hole is approx 65 - 70 mm. Currently, nobody knows how far the hole extends, and how it was formed.

The hole had seven corners like branches and have a diameter of six centimeters and was conducted parallel to the slope of a mountain and went into a fjord. Processing of the hole was very smooth all over, without any bumps or sharp corners. Specialists' analysis revealed that there were no signs of vitrification which could have resulted in a heat treatment to the hole. Research radioactivity was also negative. There were even discovered traces of sand into the hole. So researchers have been placed unable to give a clear answer on how the hole was made.

The hole went further on down into through the ground, with a 20-30 degree downward angle.

Unfortunately, the hole was covered with mud, and has not yet been recovered. But according to those who saw it, it too was in the shape of a 7 edged star.

The hole was named the star Volda and although archaeologists, cavers have tried to explain the mystery of their effort was fruitless. Each test was mired in the absence of one or more pieces of the puzzle. Simply no one could explain how it could be accomplished such a hole, given its shape completely and very special. The material that was once the hole is not very easy to be processed, and I mean the granite.

Various newspapers, both local and national, have been trying to find the solution, but none has succeeded.
Geologists, scientists and drilling engineers across the country have been contacted, but so far no one has come up with an answer to how this hole was made.
The hole was found by a construction worker working on removing bits from the mountain in order to make room for a building project. After digging a couple of metres into the mountain, chopping out large pieces of rock, he noticed a strange star-shaped hole in two of the boulders.
Approximately 4 metres of the hole was dug out from the mountain. On top of the mountain was a layer of clay and dirt, which according to neighbours have never been touched.

Many different theories have been presented on the origin of the hole. Some have suggested a divine intervention, UFO`s, weathering mineral ores, hammer drills and unbalanced drilling heads. But so far no one has been able to show reference to similar holes. 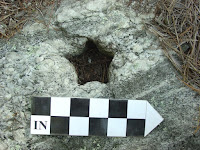 Local legends circulating among people living in the area say that on certain days over several years in the area where the hole is a vapor that emanates be yellow-green or orange or reddish light. Of course, this was before the discovery hole when people did not know of its existence.
The origin of the Star-shaped hole in Volda is probably not as mysterious as speculations would have it to be. Several local blacksmiths have revealed that star-shaped holes were quite common in the old days. This happened a year later after the discovery hole in 2008. They say that the hole in Volda most likely was drilled in the 1930s and that there are even more holes similar to the one in Volda at other locations. The holes were created when the workmen used a six-sided drill head to carry out mountain drilling. However, there are people who question this solution. But, as of now the most likely conclusion is that the hole was made by human workers more than 80 years ago. But what is certain is that scientists and engineers have not yet given a verdict on the origin of the holes.

In the years that followed the seekers of mysteries interest in the area has brought more people who carried out various checks which were discovered after other holes. But they had only forms the subject of this article. As such, masons theory from the last century is not so sure. 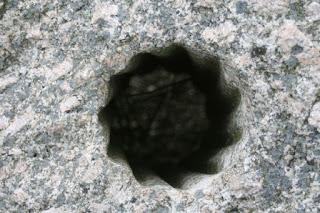 
If you appreciate the interesting material that you read, give them and others a chance to enjoy it with a simple SHARE! Thanks in advance !!!

HAVE A NICE DAY !

What do you think is the origin of human beings on Earth?